“Let us think of a school as a social laboratory where pupils themselves are the experimenters, not the victims of an intricate and crystallized system…Let us think of it as a place where community conditions prevail as they prevail in life itself.” 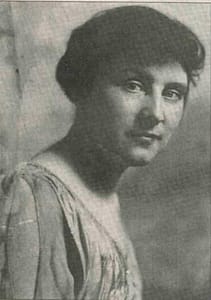 Helen Parkhurst, (She was born March 8, 1886, in Durand, Wisconsin, U.S. She died June 1,1973, New Milford, Connecticut.), was an American educator, author, and lecturer who devised the Dalton Laboratory Plan and founded the Dalton School, New York.

Parkhurst graduated from the River Falls Normal School of Wisconsin State College (1907), did graduate work at Columbia University, and studied at the universities of Rome and Munich and with Maria Montessori in Italy. Much later, she earned a master’s degree in education at Yale (1943) and became Yale’s first female fellow in education.

She taught briefly in Wisconsin in a one-room country school when she was only 18 years old, moved to Tacoma, Wash., in 1909, and returned to teach at Wisconsin Central State Teachers College (1913–15). Around 1918 she came into contact with the wealthy Crane family who lived in Dalton, a town in the state of Massachusetts. She taught the daughter of the house during one year and tried to introduce her ideas at the local high school. As she failed to be successful, she left for New York. With financial help of the Crane family she opened The Children’s University School in 1919. This school was renamed into The Dalton School in 1920, in reference of the hometown of her sponsors. The school still exists today.

Parkhurst remained headmistress of New York’s Dalton School until her retirement in 1942. Over the final three decades of her life she lectured, helped institute her plan throughout the world, wrote books, and produced radio and television shows for and about young people. Her books include Education on the Dalton Plan (1922), Work Rhythms in Education (1935), and Exploring the Child’s World (1951).

The ideas of Helen Parkhurst

As a schoolchild she found it difficult and discouraging to sit still, to listen, to practice and to repeat all the time. When she became a teacher in 1905 she wanted to act differently. It turned out to be impossible to teach in class at a one-teacher school according to the prescribed methods. It was a school with roughly forty pupils of different ages and varying levels! Parkhurst came with a simple and ingenious solution: she put the prescribed school schedule aside and asked the children to choose for themselves out of the offered learning material, in order to make learning programs of their own. Pupil and teacher started a cooperation as it were, as part of which the pupil obligated himself to reach the chosen learning aim within a fixed amount of time. The teacher promised to help, if necessary.In 1922 Parkhurst set out her educational theory in the book ‘Education on the Dalton Plan’, in which she further elaborated the principles of her teaching method: freedom, responsibility and cooperation.

Inspired by the intellectual ferment at the turn of the century educational thinkers, such as John Dewey, began to cast a bold vision of a new progressive approach to education. Helen Parkurst caught the spirit of change and created the Dalton Plan. The Dalton Plan is not a system, but an influence. It is a vision of how people learn, it’s an attitude of how teachers treat pupils, listen to them, challenge them to learn.

The first principle: Freedom and responsibility

“Freedom and responsibility together perform the miracle”

Freedom is necessary for the sake of making one’s own choices, of finding one’s own ways. But freedom does not mean that anything is possible and allowed. ‘The ideal freedom is not a freedom of obligations and even more it is not any lack of discipline. The child that just does what it wants, is not free. On the contrary, it becomes a slave of bad habits, egoistic and unfit for a life with other persons.

It is the task of the teacher to provide any pupil the structure to learn to live with freedom within the limits of the assignments. Freedom means: being able to cope with responsibility. Point of departure is the trust in the capability of any child. The pupil himself estimates what he needs to finish a task and in what amount of time. Afterwards he gives account to the teacher.

Learning to cope with freedom goes step by step. Pre-schoolers in a nursery class do it with small, survey-able tasks they choose themselves and perform independently. As children and youngsters develop further, assignments become larger and more complex.

“He studies on his own responsibility in the company of his fellows, all persuing the same adventure. He forms the same kind of relationships in his school life that he will afterwards get in his business or professional life. He is learning by trying.”

To be able to participate later in society one needs to learn to cooperate. Also with people one does not choose oneself. Therefore Dalton schools give much attention to playing and working in small groups. Mostly it has to do with pupils from the same class who perform a task together, but it also occurs that pupils of different ages work together. By doing things they learn to listen to one another and to have respect for each other.

Parkhurst acknowledged the area of tension between the social function of the school and the task to develop the individual. In her eyes it was an educational precondition that children from their early youth on can experience that being free, independent and cooperative is limited by its own capacities and by the group. The school, in Parkhurst’s view, would provide children with an experience of genuine community, as a preparation for full participation in the democratic community beyond its doors.

For Parkhurst there was no separation between educating and raising the child, between the transfer of knowledge and culture, between building of character and conscience. She had a school in mind where children learn by giving them the responsibility for their own learning process. What does this specific pupil need to learn reading, writing, making a paper, getting socially more able? She tailored each student’s program to his or her needs, interests and abilities. She wanted to promote each child’s and student’s independence and dependability. Dalton education enhances the student’s social skills and increases their sense of responsibility toward others.

Over the years, Dalton has gained international recognition for its academic excellence. Schools in The Netherlands, Australia, England, Korea, Taiwan, The Czech Republic, Japan and Germany have adopted the Dalton Plan.